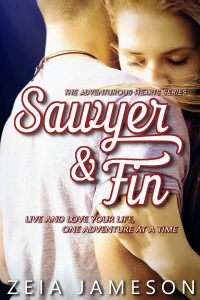 To live without adventure defeats the purpose of living.

Fin knows all about living life to the fullest. She had everything - freedom, excitement, and a promising athletic career. But it was all torn from her when a night of risky behavior ended in tragedy. Now she's doing everything she can to protect her sister from following in her tarnished footsteps.

Sawyer has never had boundaries of any sort. He asks for forgiveness rather than permission. Until one bad decision has him running from someone who doesn't forgive easily - or ever. In order to stay alive, and out of prison, Sawyer has no choice left but to rely on boundaries.

When the two cross paths, mixed feelings of hesitation and curiosity taunt their emotions and convictions. Chances are taken. Rules are broken. And they both know it all could lead to the lives they want - lives too perilous to live. Can they grow a relationship in their current safe and ordinary lives? Or will the temptation for adventure lead down a path from which they can't return?

Sawyer & Fin is Book One of the Adventurous Hearts series
Live and love your life, one adventure at a time.

Have a question or just want to chat? Contact me here.

Well I didn't think it would but the sun came out

This was awesome! #Disney #beautyandthebeast 💛

We survived the Slinky Dog Dash line. 3 hours. The

There were many, MANY amazing things about our Sta